Showing A Horse Respect... Or Not

Showing A Horse Respect… Or Not There’s been 1 major talking point around these parts this last week so let’s get straight into discussing it right now.

What I am referring to is a video by a well-known American horsemanship trainer, where he scares the life out a horse and then proceeds to completely disrespect him and all in front of a watching student.

I have to admit I was shocked (but not surprised) by the way this guy went about trying to teach both the horse and the student. And I suppose what shocked me the most was the fact that he not only thought it was OK to treat a horse in this manner but that he also thought it merited being posted online.

I have spoken to or exchanged messages with several of the HorseConscious Advisory Board about this video and they all feel pretty much the same way as I do about it.

Now, if you have seen the video, you’ll know exactly what I’m talking about and I suspect you’ll agree with the consensus we have.

If you’ve not seen the video, you’re probably screaming at your computer right now and demanding to be shown where you can watch it.

And here’s the rub for me and why I need your help.

Do I name and shame and openly declare the emperor to be not wearing any clothes?

Or do I express my views on the matter and leave it up to you, or any other reader of this newsletter, to take the clues and go and find the video for yourself?

I have to tell you that I’m tending towards the latter and here’s why.

If I name and shame, I could risk creating a powerful enemy with enough legal firepower to completely obliterate both me and HorseConscious. And besides that, my remarks would have absolutely no effect on his followers judging by the glowing comments I read on his site. They have been drinking way too deeply from the Kool-Aid fire hose to even consider changing their views.

So I’m either preaching to the converted (aka you) or my words will simply fall on stony ground and run the risk of growing not flowers of change but weeds of litigation.

You see, overarching all of this is the more general question of how we spread the word and open people’s eyes to the abuse of horses that happens every day.

Yes, we can set a good example but is that sufficient?

Isn’t that a bit like saying that during the late ’30’s the politicans of Britain and America should have thrown each other more garden parties and held more receptions as a way of demonstrating to that nasty Mr Hitler the way countries should behave towards each other?

I’m not suggesting for a moment that the gentleman concerned compares in any way to Hitler but you get my point. Surely we can’t just stand by and let this very public display of abuse go unremarked.

Maybe there are 3 groups of people out there:

Clearly then, it is this third ‘open’ group where our opportunity lies and this where I need your help.

When I was recently over in Canada, Sandra Wallin very kindly hosted a small HorseConscious gathering for people who lived locally (although one lady, Julia from New Zealand, dropped by too!).

During the meeting we were discussing what people were looking for from their horses. I suggested that most people in group 3 just want to deepen their relationship but others suggested that sometimes it might be to make life easier when generally handling their horse, or for more enjoyable riding together, or for better performance in competitions. 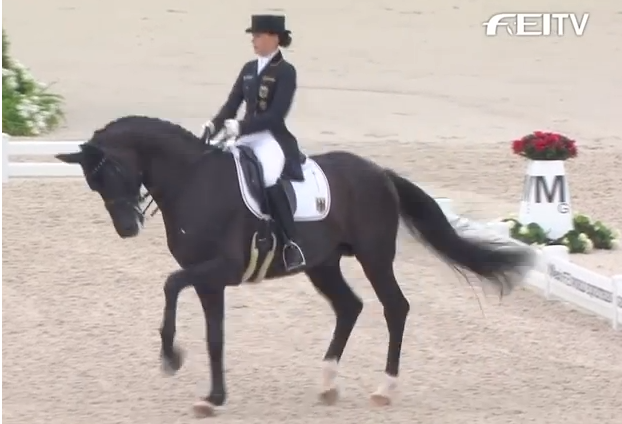 I captured this still image from one of the FEI World Championship daily highlights videos.

I’m sure some people will argue this is one freeze frame taken from an entire performance just as the horsemanship video mentioned above was just 2 minutes taken from a whole day’s training. However, I’m a believer in ‘how you do anything is how you do everything’ so surely this horse’s neck and head shouldn’t be looking like a snake who’s coiled to attack, should it??