Homeopathy can be advised for different complaints in horses. This can range from chronic and acute complaints coming up during pregnancy and foaling. The opinion of the classical homeopath is aimed at boosting the self healing ability of the horse and thus not comparable with a treatment like this is performed by a veterinarian. But it can be used as a complementary therapy.

The base for a healthy offspring is laid upon the choice of the parents. In nature the animal regulates this by itself. The choice of breeders depends on the purpose the goal people want. As homeopath I also engage the energy of the any surrogate mother used by breeders in my advice.

In general, it is wise that the mare will not be vaccinated during the first four weeks of gestation. Also giving medicine is not recommended if it is really necessary. Of course, it is wise to ensure that the expectant mother does not come in contact with insecticides. Giving herbs and anthelmintics is also discouraged.

Example of a Friesian mare Lieuwke who was treated during her pregnancy with Sebasil(written by owner):

On 24 December 1999, Lieuwke unfortunately lost her foal who was born 6 weeks too early. This was due to preeclampsia revealed after examination. It turned out that the foal was poisened by Sebasil. Because de mother tried to remove the Sebasil, the foal had contact with this medicine. It was a nice “completed”filly. The other times she was pregnants afterwards she was not treated and she got nice healthy foals. 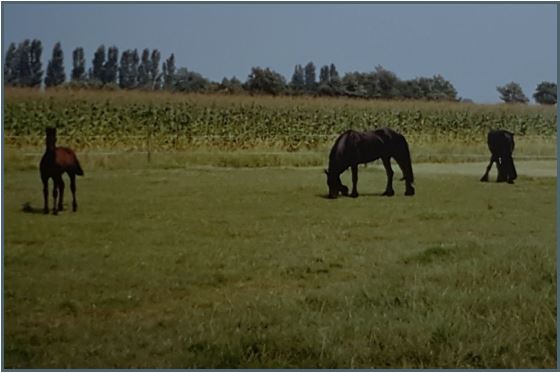 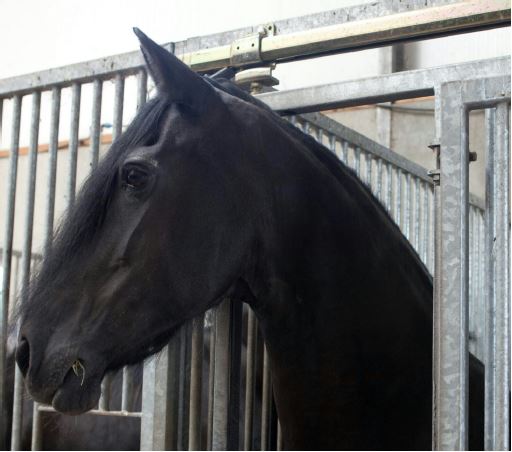 Bleeding can be observed during the second half of gestation. This usually has little meaning. It can come from varicose veins in the vagina and is not acute. Although in severe hemorrhage there is should be immediate action. This could be a sign of an abortion.

In this article I will highlight some problems which can occur. And how homeopathy helped in some cases. Ofcourse it is important to enable an veterinarian but until he/she arrives you can help with homeopathy, after consulting an homeopath so you know how to use the appropriate remedy. It is wise to cooperate with the veterinarian in using homeopathy.

Each pregnancy is unique and usually expires this without problems. Sometimes though they will still occur. I will discuss a number of issues and how homeopathy can help.

“Fatty liver” syndrome or hyperlipemia can occur especially in ponies and donkeys and rather occasionally in horses; Sometimes with mares at the end of the gestation. The cause is usually a reduction of the energy intake with fat animals. This reduction in feed intake can have different causes, such as ration changes or in reduced feed intake or during illness. This will resorp the fat reserves of the animal which causes too much fat in the circulation.

Good nutrition and enough exercise are important. A wrong diet and/or lack of exercise is probably the cause of lots of problems before and during pregnancy. A fat animal has problems in getting pregnant and will definitely have problems with foaling. However, never put a pregnant mare without consultation with the specialist on a diet. When pregnant mares are put on a heavy diet this can lead to imbalance of mother and foal. The mare gives a lot of nutrients to the foal and during a heavy diet will save too little nutrients for herself.

When you suspect hyperlipemia it is wise to contact a veterinarian. The veterinarian may than via a blood test determine whether that is the case and can can start a treatment. Complimentary homeopathy can be used.

When a birth occurs earlier than the normal distribution we speak depending on the time of occurrence of an early embryonic resorption, premature birth or an abortion.

When a pregnant animal can’t carry one or more foals till the end of gestation, the fetus will be resorpted by the mother body (early embryonic resorption) or pushed from the womb. When this occurs at a later stage we speak of an abortion.

There are several causes that can cause the above problems, such as defects in the construction or function of amniotic membranes, endotoxins or rhinopneumonitis virus. 70% of all horses carry the last virus. Vaccination against this is no guarantee that the pregnant mare is not going to reject the foetus. Good stable management is a priority. Stress factors or excessive exercise can also cause abortion. Stress can be prevented by a healthy, measured way to treat the mare.

A lack of contractions (labor pains weakness) of the uterus can occur by various physical problems, but also by restlessness and stress of the mother. Especially nervous animals turn out to be able to paralyze the muscles of the uterus. Also a long birth process can lead to a lack of contractions. Avoiding stress can help to avoid this problem. In consultation with the veterinarian homeopathy can be helpful. Stress can also be treated with homeopathy.

During foaling it is possible that a small amount of blood is lost. This is normal: there may be a blood vessel teared into the vaginal wall as a result of the pressure that arises. If there is a lot of blood lost is there is probably a problem; for example, a tear in the vagina, or worse in the uterus. There may also be something wrong with the foal.

Active uterine cramps when the uterus contracts (oxygen deficit) Deviation of the sex organs; congenital or by a fracture in the pelvis. Also a twisted uterus could be a threat, but that’s mostly not the reason.

If a foal dies before birth an infection can be the cause, such as toxoplasmosis (basically more in meat eaters, but can also occur in horses). Furthermore a herpes virus can also be the reason. If the animal has a physical defect, disconnect the umbilical cord after birth can be deadly, because the foal has to breath by itself as soon as possible.

In the event of the death of the foal the mare should emotionally be accompanied. But also there must be a solution be found for milk production. Another foal the mare may “adopt” or the milk can be collected for other foals

These were some issues that can be treated (complementary) with homeopathy.

But also after the foaling is enabled, problems may occur physically, such as uterus inflammation, inflammation of the lining of the uterus, hemorrhage and also retarded placenta. On the mental area can the mare and the foal also behavioral problems that can be helped through homeopathic guidance.

If homeopathy is used there are a number of issues which the homeopath should know. In what way does the problem occur, what is the mental expression/type of the horse and how does it react to the situation. On that image and the type of animal an appropriate treatment will be advised.

Martine du Floo is allround fitness trainer, sport masseur for man and horse and homeopath for man and animal. Her expertise is holistic and she uses this know-how in both human and animal treatment in order to get a good balance. www.infopegasus.eu